Northwestern University harbors one of the midwest’s fastest-growing tennis camps. Located just north of Chicago in the beautiful town of Evanston, our camp provides a fun and competitive environment for all. Under the direction of Northwestern University Men’s Tennis Coaches Arvid Swan and Chris Klingemann, players of all skill levels can get a leg up on their competition this summer!

In 2020 the Northwestern Tennis Camp will offer 4 weeks of camp for boys and girls ages 6-18. The camp is designed so that each camper receives personal attention, advanced teaching techniques, intensive drill work, and game/match play daily. Campers are broken into small instructional groups with those of similar age., ability and experience so each child is working in a group that is commensurate with their experience level.

We tailor each program to the level of the players allowing for maximum learning in a level designed to challenge and reward.

Half Day AM Option:

In the case of inclement weather, Northwestern has 6 indoor courts and we will have full use to these courts. As the camp runs better outdoors, we will shift our daily schedule in anticipation of rain to ensure we maximize our court time outdoors. Camp will proceed rain or shine each day. 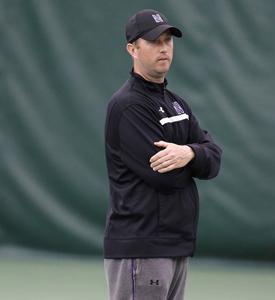 Arvid Swan has taken the Northwestern University men’s tennis program to new heights since he took over as head coach in 2008.

The Wildcats enjoyed one of the most prolific seasons in school history en route to their second straight NCAA tournament appearance in 2013. NU posted 22 dual match victories, the second most in school history and one off of the school record.

The ‘Cats reached as high as No. 18 in the ITA team rankings and defeated 11 ranked opponents. Northwestern was assigned to the NCAA regional in Athens, Ga., where it rallied to defeat No. 19 Wake Forest in the opening round, giving the Wildcats their first NCAA tournament victory in 15 years.

Northwestern had its best season in program history to date in 2016, winning a school record 26 matches and hosting the first two rounds of the NCAA tournament as the No. 14 overall seed. The Wildcats reached as high as No. 7 in the national rankings during the regular season. The team finished second in the Big Ten with a 10-1 mark and won 13 times over top-50 national opponents.

Swan was named the ITA Midwest Region Coach of the Year for his efforts. He earned his 150th career win in the second round of the Big Ten tournament against Purdue

Swan came to Northwestern after one year as the head men’s tennis coach at DePaul University. While at DePaul, Swan improved the team immensely. On the heels of an 8-14 season, Swan’s Blue Demons finished the 2006-07 season with an 18-7 record and reached a ranking as high as No. 58 in the nation.

Prior to taking the position as head coach at DePaul, Swan served as associate head coach at NU from 2003-06. While at NU, Swan helped take the program consistently improve as the Wildcats jumped from sixth in the Big Ten to back-to-back fourth-place conference finishes. He also helped lead the team to a top-40 national ranking twice. In 2004 and 2005, the ‘Cats reached the semifinals of the Big Ten Tournament. They also made an appearance in the 2006 NCAA Tournament.

In his playing days, Swan was world-ranked professionally in singles and doubles before moving into the coaching ranks. While at Michigan, Swan was the recipient of the Scholar-Athlete award in 1995 and earned his way onto three Academic All-Big teams from 1996-98. In 1996, Swan was elected to the All-Big Ten team as the Wolverines went on to win the Big Ten championship. Swan captained the squad until his graduation in 1998. 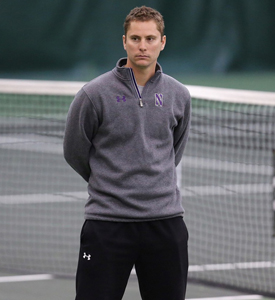 Chris Klingemann is in his seventh season on the Northwestern coaching staff and his fourth as associate head coach, a role he assumed in August 2014.

Klingemann’s time in Evanston has coincided with the resurgence of the program. The Wildcats have made the NCAA tournament in all six of his seasons on staff and have posted a 117-58 overall record.d athletic accomplishments.

Prior to joining the collegiate coaching ranks Klingemann starred for four years at Ohio State and played for over two years on the ATP Tour upon graduation.

Klingemann, a native of Winnetka, Ill., spent two-and-a-half years playing on the ATP circuit where he ranked amongst the top-six ATP professionals in Canada and amongst the top 520 players in the world. Playing doubles, Klingemann won two Futures Tournament titles and advanced to the finals of a Challenger Tournament. He has a career high doubles ranking of No. 480. Klingemann was also a singles finalist in one Futures Tournament and posted wins over four players who were each ranked in the top-200.

Prior to joining the professional tour, Klingemann spent four successful years playing at Ohio State University. There, he helped lead the Buckeyes to three straight Big Ten regular season championships from 2005-07 and a pair of Big Ten tournament crowns in 2006 and 2007. Ohio State reached the quarterfinals of the NCAA tournament three straight times (2005-07) during Klingemann’s tenure in Columbus, Ohio.

Since leaving the ATP tour in 2010, Klingemann has worked at the College Park Athletic Club in Deerfield, Ill. as a high level junior pro. He graduated from OSU in December 2007 with a degree in communication.

My daughter really seemed to enjoy the camp. The instructors were good and we liked the staff/camper ratio. My daughter’s tennis skills definitely seemed to improve and she had fun!

The coaches were dedicated. My daughter felt like her game improved.

This is my son 3rd year in a row doing this camp. He enjoys it. Staff and coaches do a good job and also very accommodative to our needs. Bonus they have an indoor court in case of bad weather.

My daughter loved it!

There were a lot of kids which made it a fun atmosphere. The coaches were positive and happy throughout the week. Also, the fact that you had Gatorade available the entire time was very helpful and I felt better about my son being out in the sun for so long.

Challenging and fun. My kids loved it!

Enthusiasm to coach, making the game fun and my girl wants to come back for more inspite of the 45 minute commute 🙂

My daughter had a great week at camp! 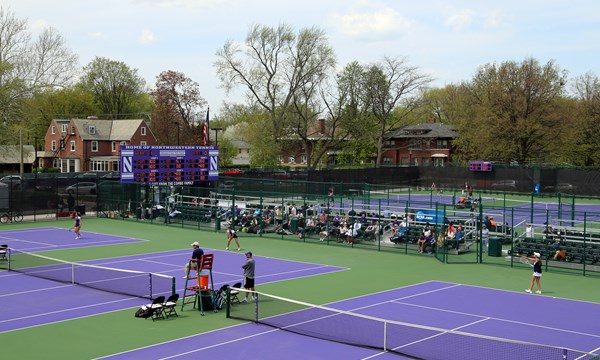 The Vandy Christie Tennis Center was dedicated on October 29, 1994 to honor an outstanding alumnus and special representative of Northwestern University. Christie’s Northwestern career began as a varsity tennis player in 1955. He returned as the men’s head coach from 1976-83 and then became the director of athletic development.

The Center boasts 15 courts, a pro shop and permanent seating for approximately 400 spectators. The courts have been home to Wildcat tennis since 1941, and have been the site of four NCAA Championships and 23 Big Ten Championships.

In 2013, the facility was upgraded thanks to a generous donation from Chris and Courtney Combe. The donation from the Combe family includes a main scoreboard, six individual scoreboards (one for each court), and six 27-foot long bleachers that are three rows deep with chairbacks.

The Christie Tennis Center is located on Sheridan Road.