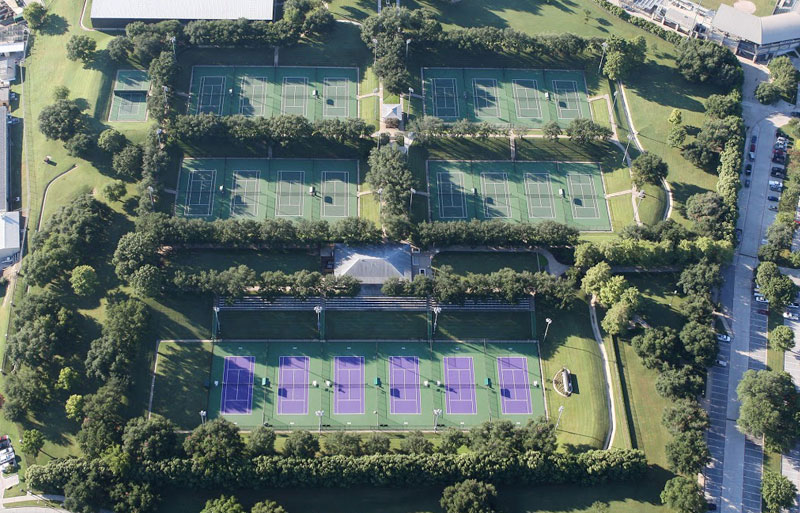 One of Wilson’s most popular tennis camps across the nation, the Wilson Collegiate Tennis Camp at Texas Christian University, offers four weeks of incredible fun and learning. The camp at TCU is co-directed by the world-class TCU tennis coaches David Roditi & Lee Taylor Walker, and Christopher Williams. Nestled on the beautiful TCU campus, this camp offers something for everyone with full and half-day camper options.

Each summer, the camp is held at the Bayard Friedman Tennis Center, home of the TCU Varsity tennis teams. Each camper receives personal attention throughout the week, advanced teaching techniques, intensive drill work, and game/match play daily. Campers are divided into small instructional groups with those of similar age., ability and experience, so each child is working in a group commensurate with their experience level. We tailor each program to the level of the players. Action-packed days with tennis fun and extracurricular activities like swimming (for full-day campers) ensure the tennis camp at TCU is the highlight of the summer for kids ages 7-18.

No meals provided. Full Day campers should pack their lunch each day. 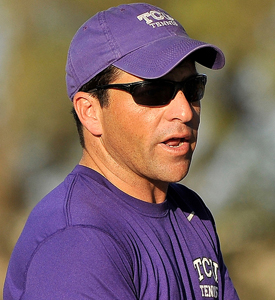 David Roditi, one of the great players in the history of the TCU men’s tennis program, was hired as the Horned Frogs’ head coach on Sept. 7, 2010. A three-time All-American who lettered from 1993 through 1996, he still holds the school record for combined career victories.

In his six years at the helm of the TCU men’s tennis program, Roditi has returned the Horned Frogs to the top of the tennis world. A top-50 program when he was hired, Roditi has led the team to back-to-back top 5 finishes as they were ranked No. 4 at the end of 2015 and tied the program-high of No. 3 to conclude the 2016 season.

Starting the 2015-16 at No. 3 in the first Oracle/ITA poll, Roditi led the team to unprecedented heights, which included the program’s first Big 12 Regular Season title as well as being named champions of the Big 12 Tournament. After hosting the ITA Kick-Off Weekend for the first time in program history, TCU earned a bid to the ITA National Team Indoor Championship for the second straight season where the team advanced to the semifinals. 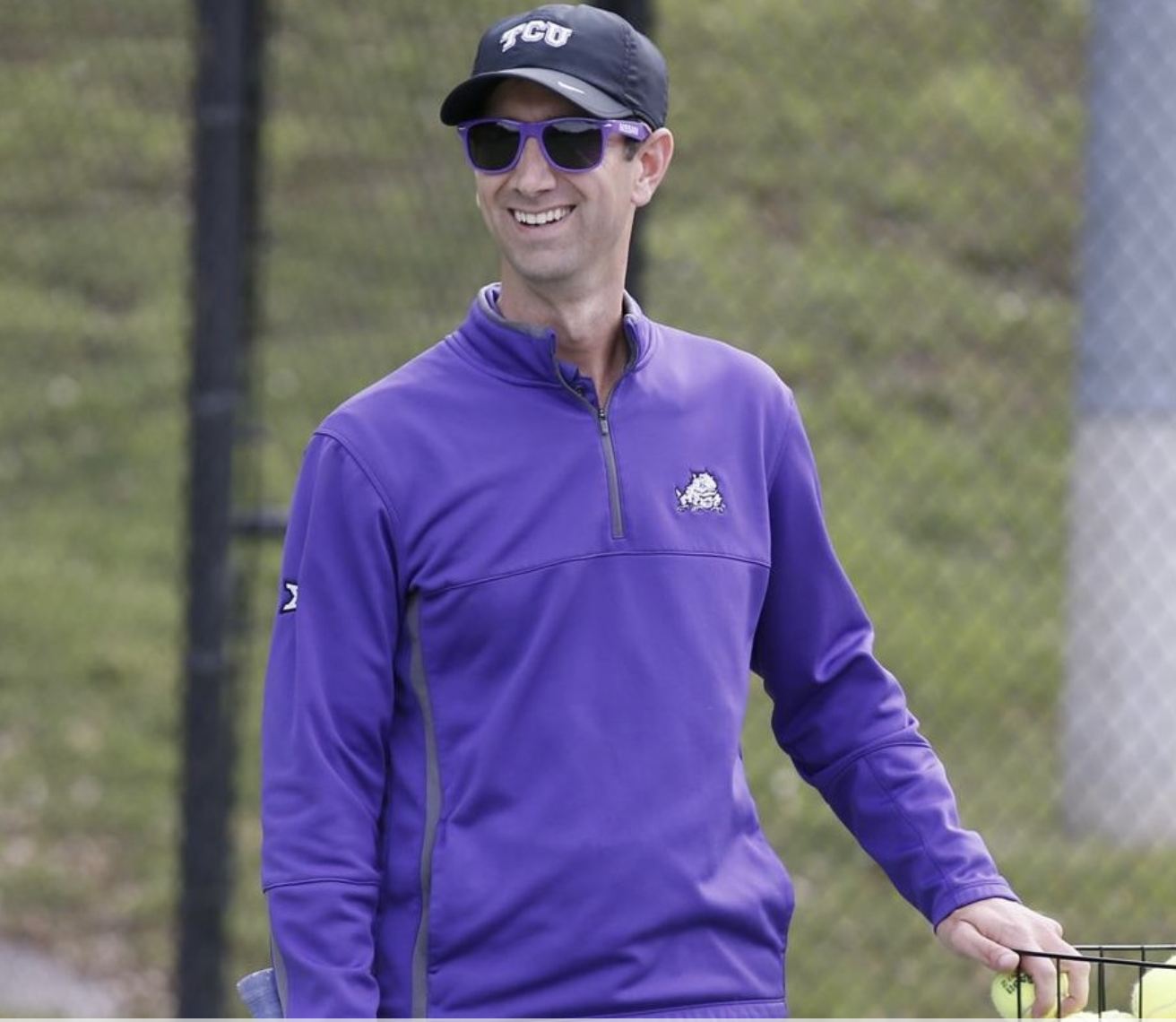 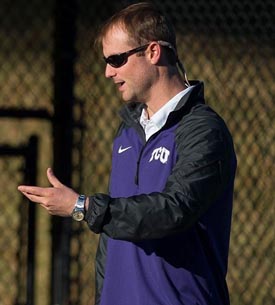 TCU women’s tennis head coach Lee Taylor Walker welcomed Christopher Williams back to his staff as an assistant coach in September of 2018.

Williams joins the Horned Frog staff after coaching tennis professionals on the ATP and WTA tour from 2012- 2018.

Since beginning on tour in 2012, Christopher has been the head of coaching teams in all 4 Grand Slams and achieved multiple ATP Challenger Tour titles, ITF Men’s 25k titles, and ITF Women’s 50k titles. At the core of this success has been the appreciation and passion for the mental game. In 2014, Christopher served as the Director of Mental Training for Bishops Gate Tennis Academy in Orlando, FL while continuing to travel with WTA player Olivia Rogowska.

Williams has worked as a coach for over a dozen professional tennis players to multiple titles including:

Williams’ coaching career started as a volunteer assistant coach for his alma mater, Tennessee.  During his two seasons with the team from Aug. 2010 to May 2012, Williams helped coach four players to All-America honors and saw two different singles players and one doubles tandem achieve the No. 1 Wilson/ITA ranking. The team was SEC Regular Season Champions, while also finishing runner-up at the ITA National Indoor Team Championship.

He spent his first two years of college at Wofford, before transferring to Tennessee for his final two seasons. While in Knoxville, Williams helped his team to a 2010 SEC regular season and tournament championship and an NCAA runner-up finish. In 2009, the team advanced to the NCAA Sweet 16 and finish ranked No. 8 nationally.

At Gonzaga, Siddiqui spent four years on the coaching staff and was part of the rebuilding efforts that saw the Zags post the program’s first winning season in 2018 with 10 wins and two players earn All-WVV Singles honors along with an All-WCC Doubles team. During his four years with the team, Gonzaga posted 32 wins and four players earned All-WCC singles and doubles honors. In the classroom, seven players earned WCC All-Academic Honors, eight were named ITA Scholar Athletes and the 2016 squad earned the ITA All-Academic Team Honor.

The coaching staff of the Wilson Collegiate Tennis Camp at Texas Christian University is one of the strongest and most well respected in the country. Consisting of top collegiate coach-es and players, the staff is handpicked for their ability to teach and relate to young players in a friendly, thorough and responsible manner.

5 Star – This was my son’s second year and the coaches (the head coach and several others) all remembered my son from the previous camp. I was shocked and touched by that. My son also had a great time and improved his tennis skills!

5 Star – Our first year to attend we lived in Alabama and came to tux for the camp, we have family close so it worked. We have since moved back to Texas but currently live in Houston. Our daughter made sure this was the first camp we signed up for this summer. The coaches are amazing and really help and encourage the kids to do better and have fun. Our daughter has already asked to come back next year regardless of where we live. That says a lot about a camp atmosphere.

5 Star – Kids had a blast (two 8 year old girls) and were eager to go every day. The coaches know how to make this fun, and unlike a parent trying to teach their child, the kids will listen o the coaches. Lol. Both kids are ready to sign up next year. Highly recommend!

5 Star – Camp staff were great all the way around with the kids. Camp was not overcrowded and all students received great instruction and it seemed extra attention. Planning to go again next year.

5 Star – Coaches were great; very helpful and courteous. TCU facilities are excellent and easy to get to.

5 Star – Great instructors that really cared about each individual camper. Helped with every aspect of the camper in improving their game.

5 Star – I already recommended to 2 friends. The groups were small, very well organized by skill level and the coaches were fantastic! Looking forward to attending again next summer.

5 Star – My son just turned 7 in the last week of May and his camp was the 1st week of June. He was one of the youngest campers and was signed up for full days. The 1st day I picked him up I thought he would say “to hot/to hard” but no he loved it! He was so sad for the week to end. We will be doing this camp every summer! 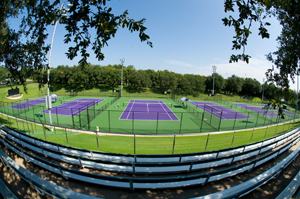 The Bayard H. Friedman Tennis Center and Bernard J. “Tut” Varsity Courts is widely considered as one of the finest tennis facilities in all of collegiate athletics. Completed in 1976 at the cost of over $2-million, the Bayard H. Friedman Tennis Center and Bartzen Varsity Courts plays home to the TCU men’s and women’s tennis programs and is located on the southwest corner of campus.

The Bayard H. Friedman Tennis Center houses both indoor and outdoor facilities and features 27 total courts – six varsity tennis courts and five indoor courts, which are reserved solely for the men’s and women’s tennis programs – as well as 16 courts that are for public use. The outdoor section of the Bayard H. Friedman Tennis Center includes a pavilion with a seating capacity of 1,500 to go along with fully stocked pro shop and complete locker facilities. The outdoor courts are recessed by as much as 16 feet, which provides wind control and deleting many viewing obstructions.