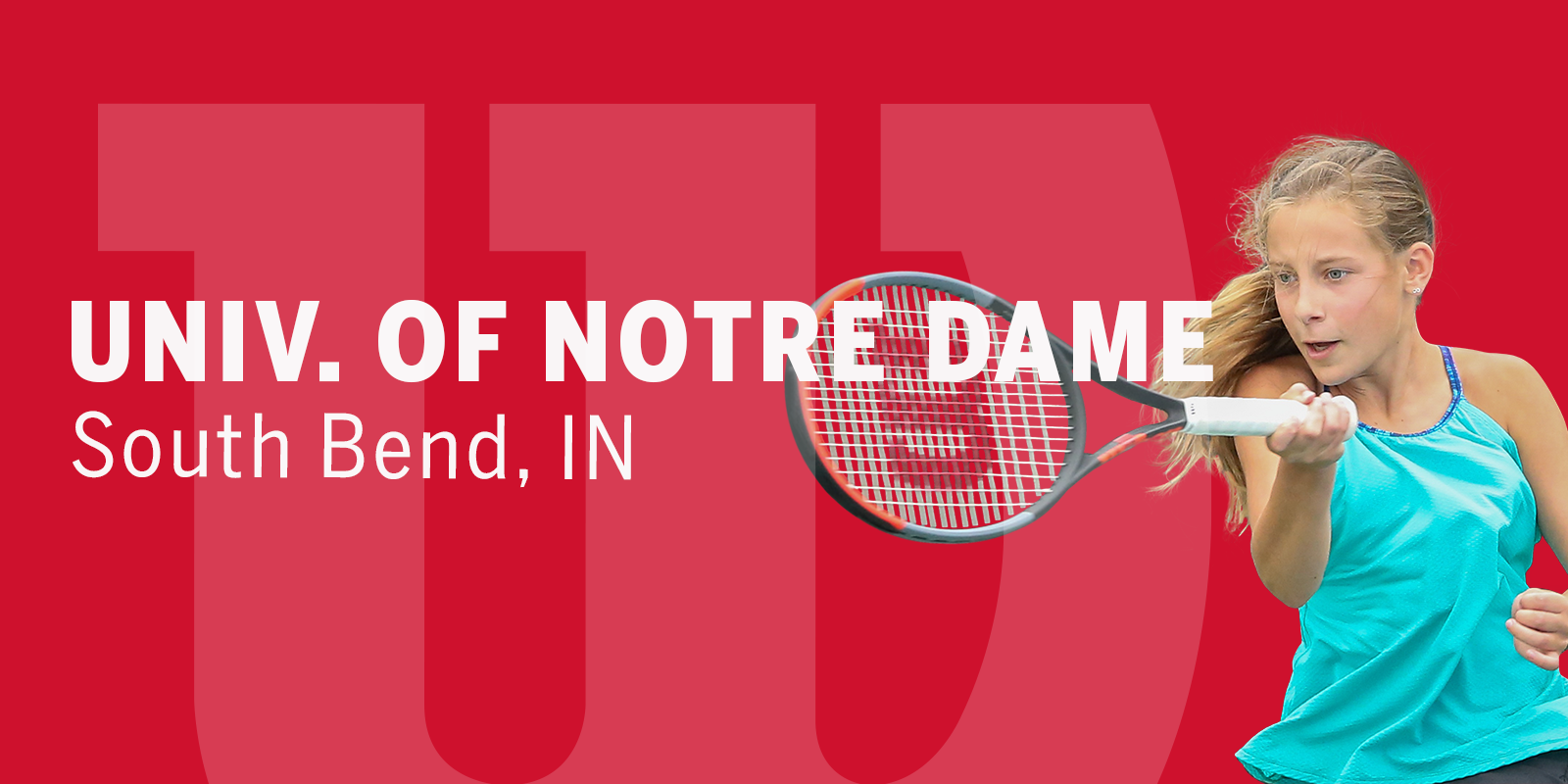 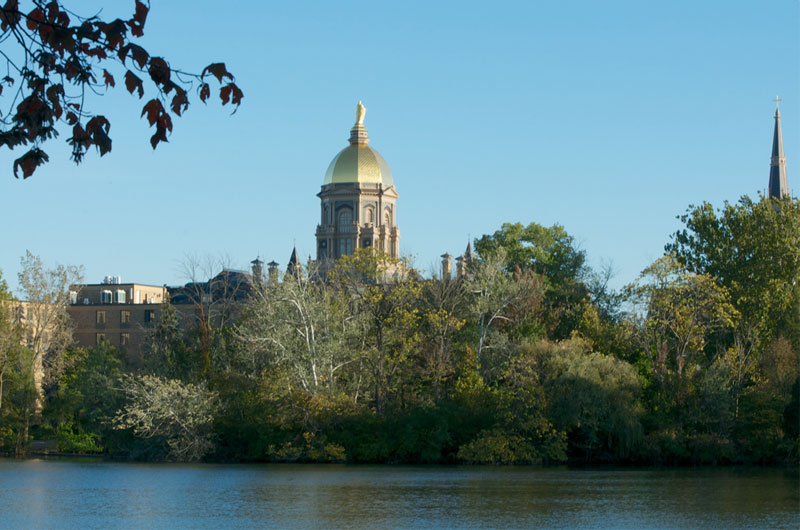 For more than 30 years, the Fighting Irish coaching staff has provided young players first rate instruction on the picturesque campus of the University of Notre Dame in South Bend, Indiana. Directed by the coaching staffs of both the men’s and women’s programs at Notre Dame, the camp offers both a Traditional and National camp to fit the needs of all levels of players.

Notre Dame offers one week of our Traditional camp as well as two weeks of our National Camp. During the Traditional week, each camper receives personal attention, advanced teaching techniques, intensive drill work and game/match play, all in a fun and competitive environment. We break the campers into small instructional groups of similar age and ability so each child is working in a group that is commensurate with their experience level. Our program is tailored to the level of the players. Beginners would get a heavier dose of swing technique and fundamentals, while more advanced players would have more focus on strategy, point building and percentage tennis etc.

Our National Camp is one of the most popular camps in the country and is specifically designed for players with a high level of experience and training. This camp is open to all skills levels but offers a more intensive training curriculum with advanced concepts including instruction on match play tactics and strategies for both singles and doubles as well as speed training and high-intensity drill work.

(*Registration may not be open on the Notre Dame site yet. ND handles their own registration internally)

– Non Boarder option includes all sessions of tennis, lunch, dinner, free time and evening activities. Pick up is at 8:30pm every night at the courts EXCEPT Tuesday night with will be at the main circle on Notre Dame Ave. We do a non-tennis session on Tuesday night, so that’s why there should be a different pick up point that night.

– Boarder option is an inclusive camp experience running from Sunday – Thursday with the campers staying in the dorm, eating at the dining hall and enjoying all tennis, as well as social and recreational activities daily.

Our traditional tennis camps are designed to focus on the fundamentals and swing techniques of modern tennis strokes. We tailor the instruction to the skill level and experience of each level of player. Some of the areas of focus for each level include:
Note: A skills evaluation is done on the first day of camp and we will assign students to small instructional groups with kids of similar age, ability and experience level. Players will continue to be evaluated throughout the week and coaches will move kids into situations to push them and help ensure they are in a comfortable learning environment.

The National camps are designed for experienced young players looking for a more serious and rigorous camp experience. These specialty and limited camp offerings are open to any and all players, however, we recommend these camps for players with experience (perhaps even tournament experience). The camps will place more emphasis on the strategical, mental and physical side of the game, and less emphasis on stroke production and technique. Each location hosting an Elite camp varies in curriculum and areas of emphasis, but all camps provide 5.5 – 6 hours of training each day in a fun and competitive environment.

In the case of inclement weather, Notre Dame has 6 indoor courts and we will have full use to these courts. As the camp runs better outdoors, we will shift our daily schedule in anticipation of rain to ensure we maximize our court time outdoors. Camp will proceed rain or shine each day.

Our camps are open to any and all levels of tennis players. We have players from absolute beginner to high school/tournament level.

Airport transportation is available upon request for those flying into camp. The closest airport is the South Bend International Airport (8 miles from campus). To arrange for a pickup, please email prior to making flight arrangements.

Each dorm has a different setup. Some are doubles, triples, quads, and suites. If you would like to have players in rooms next to each other, we again will do our best to accommodate. Please please email the office at Here Here for such requests.

Should you wish to room with more than just 1 person, we will do everything in our power to arrange for this, if the room level (double, triple, etc…) allows. 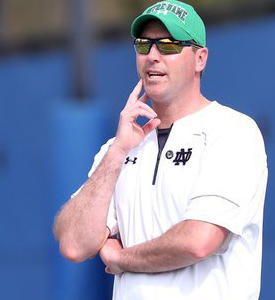 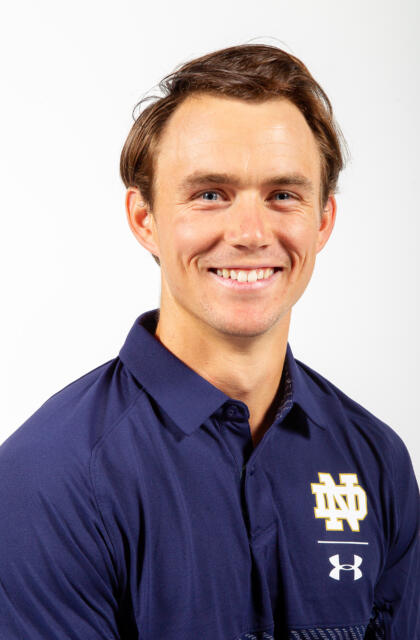 Andrews returns to an Irish program of which he was a two-time captain just three seasons ago. During his career, Andrews reached a No. 20 national ranking in singles and a No. 7 national ranking in doubles. He ranks second in program history in dual doubles wins (68); third in overall doubles wins (93); fifth in dual singles wins (77) and wins at No. 1 singles (38); and seventh in all-time singles wins (113).

Andrews was a two-time BIG EAST Player of the Year (2012 and 2013) and, as a junior, was selected as the BIG EAST Championship Most Outstanding Player after leading the Irish to their final championship title in that conference. He was a four-time all-conference selection (three BIG EAST, one Atlantic Coast Conference), was a 2013 CoSIDA Academic All-American and the winner of the 2014 National ITA/Arthur Ashe Jr. Sportsmanship and Leadership Award.

“Our daughter Ava enjoyed the camp immensely! Great coaching, great atmosphere and the fellow attendees were fun to play with. Thank you!!!”

“My son has been coming to ND tennis camp for a few years now and he just loves it. Lots of great tennis, encouraging coaches & always a great group of kids. He comes back a stronger player every time and of course being on Norte Dame’s campus just means a lot to him. He even stayed one year in his grandfather’s old dorm. Thanks for always running such a great camp!”

“Well run camp overall, with a balanced schedule, outstanding coaches and enough of them to give personal attention. Lovely facilities – those coaches are fantastic.”

“My daughter had a wonderful time. She felt safe and learned a lot!”

“My daughters learned a lot about tennis, made friends and had so much fun visiting the Notre Dame campus!” 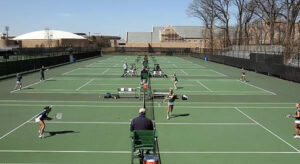 Notre Dame’s Courtney Tennis Center, the home of Irish men’s tennis since its construction in 1967 and women’s tennis since the establishment of the varsity program in 1980, has played host to the nation’s top players on a number of occasions, while becoming an extremely difficult place for opposing teams to win.

Due to its exceptional facilities, Notre Dame has played host to a number of prestigious events, including serving as the national site of the NCAA Championships three times. Just four years after it was built the Courtney Tennis Center played host to the 1971 NCAA Division I Men’s Tennis Championships, which featured what is still considered by coaches to be the finest collection of collegiate tennis talent ever assembled.
In all, the Courtney Tennis Center has been the site of NCAA action on 18 occasions, including every year from 1994-2002 for either women or men’s play.
In addition, it has played host to conference championships on 14 occasions, as well as an Intercollegiate Tennis Association Summer Circuit event for 10 straight years from 1994-2003.
In addition to the summer circuit events and postseason tournaments, the Irish women’s program played host to the Eck Classic from 1988-2002 as well as in ’06, ’10 and ’11 during the fall season, while the men’s squad competed in the Tom Fallon annually from 1987-2008 and again played host beginning in ’10, ’11 and ’12. The tournament was renamed the Bobby Bayliss Invitational in 2013.
The first home of the Irish tennis team was the Notre Dame Fieldhouse, which played host to Irish home matches until the Courtney Center was built. The structure was razed in 1983. Indoor courts in Notre Dame’s Joyce Center also were used sporadically before the Eck Tennis Pavilion’s construction.