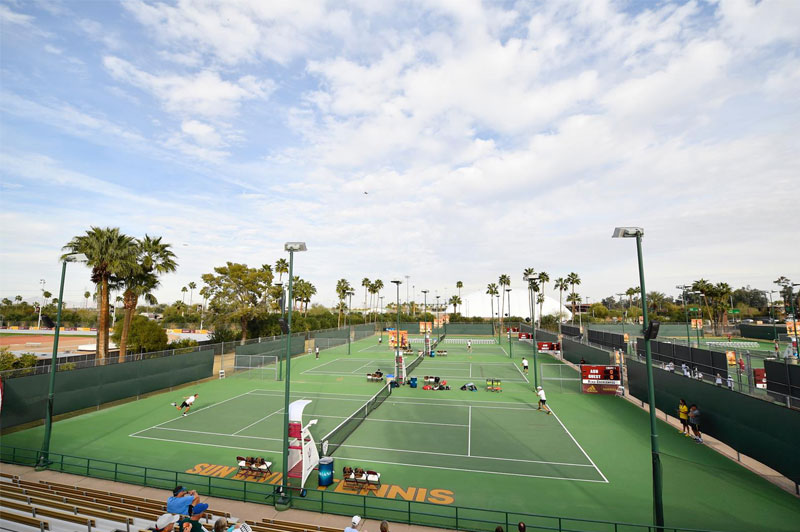 One of our fastest growing and most popular camps, The Wilson Collegiate Tennis Camps at Arizona State University will offer three weeks of day camp this coming summer. Directed by Head Men’s Coach Matt Hill, these camps provide young players with the perfect preparation to get more involved with playing the game. Each camper receives personal attention, advanced teaching techniques, intensive drill work, and game/match play, in a fun and competitive environment.

During our traditional camp, we break the campers into small instructional groups of similar age and ability so each child is working in a group that is commensurate with their experience level. We tailor each program to the level of the players. Beginners would get a heavier dose of swing technique and fundamentals, while more advanced players would have more focus on strategy, point building, and percentage tennis, etc.

The Wilson Collegiate Tennis Camps are the premier camps for young players who strive to learn the game, improve their skills and/or participate in middle school, high school, USTA team tennis or tournaments. 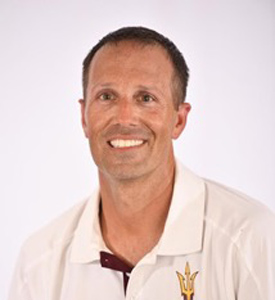 Arizona State University named three-time American Athletic Conference Coach of the Year Matt Hill as its head coach in the summer of 2016. “I’m incredibly honored and humbled at the opportunity to restart the Sun Devil men’s tennis program. There are many great players that have competed at Arizona State in the past and I think everyone, including myself, is incredibly excited to get this program back where it was and to take it to new heights as well,” Hill said. “I couldn’t be more grateful for the opportunity and the trust that Ray Anderson, Don Bocchi and Scottie Graham have shown me and I look forward to getting started.”

Hill has spent the previous four seasons as the head coach of the University of South Florida, leading the Bulls to three consecutive AAC team championships and a No. 17 final ranking among Division I programs this past season. USF advanced to the NCAA Tournament for the third straight season in 2016 after qualifying just twice in 10 previous campaigns prior to Hill’s arrival.

The 2016 Bulls reached a program-best ranking of No. 13 in the nation before finishing in the Top 20 at No. 17. Hill coached two-time All-American Roberto Cid to a ranking of No. 2 in the nation, the best ranking of any tennis player, men’s or women’s, in program history. USF also played one of the toughest schedules, notching 16 wins over ranked opponents and play-ing just four matches against unranked foes.

The coaching staff of the Wilson Collegiate Tennis Camp at ASU is one of the strongest and most well respected in the country. Consisting of top collegiate coaches and players, the staff is handpicked for their ability to teach and relate to young players in a friendly, thorough and responsible manner. 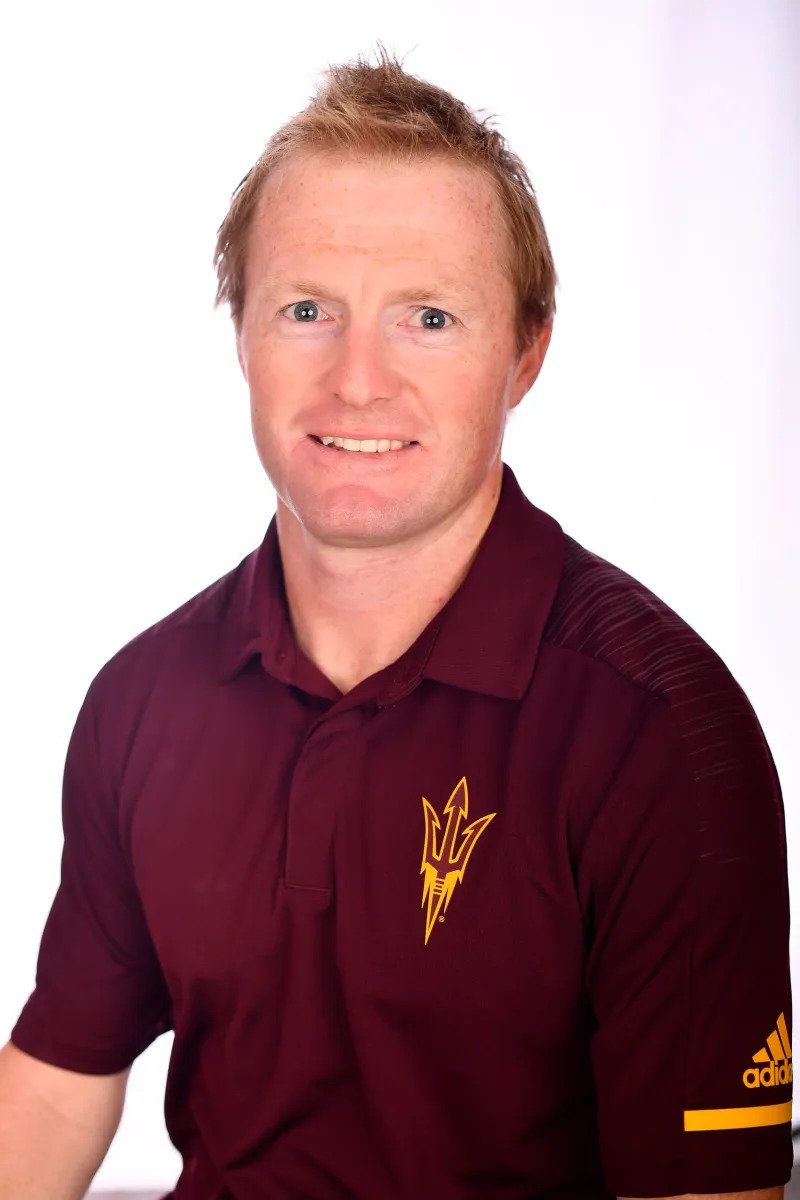 He made his way over to the United States to play collegiate tennis at Middle Tennessee State University, where he was a Team Captain, three-time Sun Belt Conference Champion, two-time Most Outstanding Player at the Conference Championships, and three-time NCAA Tournament Participant. Matt graduated from MTSU with a degree in Exercise Science, where he was named MTSU’s Male International Student Athlete of the Year and a two-time Academic All-American. After completing his collegiate career, Matt played professionally for a short period of time and became an ATP Tour World Ranked player.

Since arriving on staff at Arizona State® in 2015, Matt has helped the Sun Devil® Women’s Tennis program reach five consecutive NCAA Team Tournaments, have five different players make trips to the NCAA Individual Championships, and seen the program receive seven All-American Honors. With Matt on staff, the Sun Devils® have defeated every team in the PAC-12, risen to a Top #15 national ranking, and qualified for the National Indoor Championships (Top 16 teams) for the first time in program history. Additionally, Matt has coached a doubles team to become PAC-12 Doubles Champions, and a different doubles duo to become the PAC-12 Doubles Team of the Year, and the #1 Doubles Team in the Nation – all firsts in program history.

The tennis coaching staff was very friendly and connected well with the kids socially and with fun activities to make a longer week of training go smoothly. I noticed there was a spread of abilities and it was handled well.

This camp is Great. My son was a beginner and he learned quite a lot and he ended up liking it a lot. It is very good exercise for the kids, time very well spent. Thank you fir putting together this camp!

My son learned a lot, enjoyed the interaction with the coaches and had fun. In his words, “It was a great experience, Thanks Dad.”

Our 15 year old son had a great time, liked the coaches, and improved his game during this short week.

My son had a wonderful time at camp. He was so excited to tell me about all the new things he is now able to do that he learned from camp.

My daughter learned a lot and had so much fun!

Great coaching and people. Our daughter had an amazing time!

8:00am = Registration, Check In, Opening Remarks 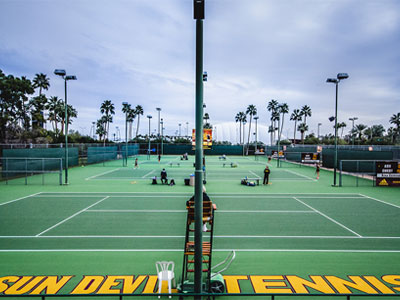 The Whiteman Tennis Center serves as the home to Arizona State’s nationally ranked men and women’s tennis teams. The original complex was dedicated May 8, 1976. It featured eight fully lit asphalt-based courts with a seating capacity of 1,200. Jack Whiteman, president of a local machinery company, paid the majority of the $300,000 it cost to build the tennis center. The Sun Devil Club also donated funds for the construction of the facility. 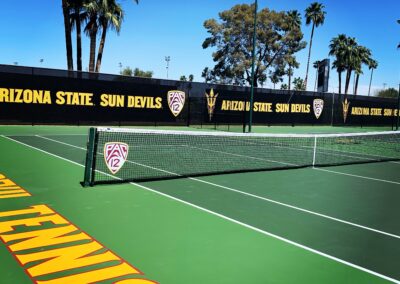 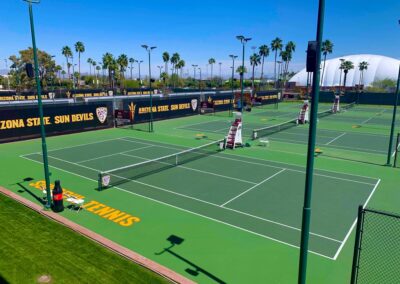